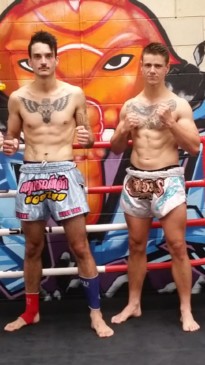 As many of you well know, our fighters Matt Wilson and Daniel Stroud had their opponents pull out of their fight a few weeks back, so the boys were unable to compete in Brute Force. Fortunately however, Johnny was able to get the boys into a new fight in no time, so they’ll be fighting tomorrow night at Young Guns #5.

This is Matt’s first amateur bout and will be Daniel’s 4th after over 10 months out of the ring, so we’re super excited for these guys to get up and represent Main Event Fitness Geelong – and we’re wishing them all the best! The boys weigh in tonight and would love to see people head down to support them, so check out the ticket and fight information below.

Main Event Fitness Geelong is a Muay Thai and boxing gym that not only offers fitness classes to the general public. They also train and sponsor competitive Muay Thai fighters at an elite level so they have the mental and physical fitness to win fights and championship titles. If you’re interested in attending a class, or want to get into fighting at an elite level, contact Main Event Fitness.